God is At Work in Central Asia

25 Oct God is At Work in Central Asia

Posted at 14:52h in Columbia by Ryan Heard
Share

Today, many people groups of Central Asia live in the confines of Islam without hope of eternal peace with God. Once this reality was made known to Pineview Baptist Church we felt that it was our responsibility to send missionary workers to share about the hope that we have in Jesus. Our first action step was to pray over the people group and ask God to raise up workers from our fellowship. In 2014 we were able to send our first team out. I was honored to be a part of the fourth team sent to strategically share the good news for three weeks in September, 2017. God answers our prayers and the following stories are proof of that.

Although many did reject the gospel there were some that attentively heard the truth of God’s love for them in Jesus. A Central Asian woman that a previous  team has been sharing with for four years now was looking at a team member’s phone pictures of a previous mission trip to Guatemala. She simply asked why we would go to Guatemala. We responded that we go to share the true story of Jesus with them.  She then asked us with all sincerity, “Why do you not come to my country and share this Jesus with more of us?” We reassured her, that indeed, that is why we have come to her country and we share with anyone who will listen. In reality, we had spent the day prior with her sharing the gospel and showing her the Jesus film. This video was the first time that this village has ever heard the good news of Jesus in their own native language. Late in the evening the woman gathered the village children together and we were able to share the good news of Jesus by acting out the Bible. The next day the woman called and told us that all the children returned to her home the following day to watch the Jesus movie. God is moving in the hearts of these people. We need to fervently pray that the illegal video that we passed out will move like wildfire in this village and that they would know with all confidence that Jesus is more than “just a prophet”- He is the son of God and he died for them.

The next week we were strolling in the park and we saw a small group of people gathered. When we passed the group we thought that we saw them reading a book; a book that looked like a Bible. The group confirmed that they were sharing a Bible. The group of Central Asians told us that they were disciples of Jesus Christ, the son of God, who died on a cross for their sins. This picture could be a normal occurrence in the United States but it is definitely strange for a country that is 99.99% Muslim. In a country that we consider to be unreached and unengaged with the gospel it is incredibly encouraging that we would encounter a group of people who are living according to God’s word when it is illegal to even obtain a copy of the Bible. As the global Church, let’s make it a habit to pray for those who do not have easy access to God’s word.

There is a great need for gospel workers to live in this country and to be living examples of what it looks like to follow Jesus. Pray that the borders would be open to gospel workers to live and work amongst the people. God is worthy of praise from every nation. Be encouraged that God is moving in Central Asia. 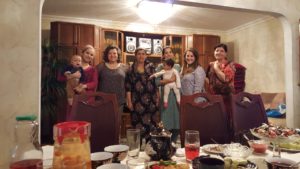