Posted at 13:28h in Uncategorized by Ryan Heard
Share
Most of the India team flew into Atlanta Thursday afternoon after 27 hours of airports, delays, and layovers. We left Amy Calfas behind to continue living and working in India until December. Please be praying for her as she adjusts to her new normal in India.
When we first arrived in India, during orientation, we were taken around to several temples in I-town. That night we had praise and worship with a few national believers. I was talking to one brother, P, about the day and the different temples we visited. He said something that I cannot stop replaying in my mind even now as I am in my house in South Carolina. He said, “It is only by the grace of God that you are not bowing down to those idols in those temples.” It’s not a super original thought, but it struck me in a way that I cannot stop thinking about my salvation and thanking the Lord for what He has done in my life. It is easy to look at idol worship in India and see hopelessness and be moved to share the Gospel of the one true living God. Idol worship in America is more deceptive. Generally speaking, we do not have carved images with faces that we physically bow down to, but we do have a multitude of things we mentally and emotionally bow down to. Idol worship is not finished when we become believers. There is always something competing for our affections. We are always worshiping something. Let us not worship that which is false.
“Those who pay regard to vain idols forsake their hope of steadfast love.” Jonah 2:8
“Their idols are like scarecrows in a cucumber field, and they cannot speak; they have to be carried, for they cannot walk. Do not be afraid of them, for they cannot do evil, neither is it in them to do good.
There is none like you, O LORD; you are great, and your name is great in might. Who would not fear you, O King of the nations? For this is your due; for among all the wise ones of the nations and in all their kingdoms there is none like you.” Jeremiah 10:5-7
This summer I have learned a lot about missions. John Piper explains the purpose of missions well: “Missions exists because worship doesn’t. Worship is ultimate, not missions, because God is ultimate, not man. When this age is over, and the countless millions of the redeemed fall on their faces before the throne of God, missions will be no more. It is a temporary necessity. But worship abides forever.” We have a finite amount of time to proclaim the good news of Christ to perishing people. We should greatly desire His name to be exalted in the earth.
“To the King of the ages, immortal, invisible, the only God, be honor and glory forever and ever. Amen.” 1 Timothy 1:17
The last Thursday we were in I-town (August 1) the girls had a spa day at a nearby salon. It was one of the national believers’ birthdays so we invited her to join us and treated her to a couple of salon services. We later celebrated with some cupcakes and enjoyed spending time with G on her 17th birthday. G comes from a Hindu family (please pray for their salvation; she shares with them everyday). She became a believer this past year. I was sitting with her that night listening to Christy Nockels (G knew the words better than I did!) and talking about her salvation. She kept repeating how happy she was that God chose her. She would say. “I can’t believe He chose me! The best thing in my life is that He chose me!” How beautiful to see a sister so excited about her salvation. It was a blessing and encouragement to be able to celebrate G’s birthday with her.
Sunday the fourth we left I-town and flew to Delhi. We went to a couple of different markets to do some shopping and ate at a great Caribbean restaurant. Thankfully throughout our stay in Delhi no one on the team got Delhi belly! 🙂
Monday we took a bus to Agra to see the Taj Mahal. It was a great mini-trip! We took tons of pictures and had some fun walking around outside the palace. 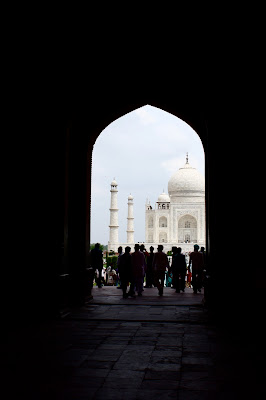 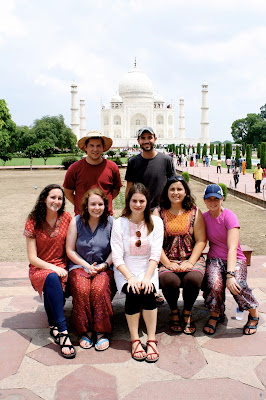 Tuesday we visited the India Gate and took bicycle rickshaws around Old Delhi. That afternoon we did some more shopping at our favorite market and that night we had our end of the summer banquet at Hard Rock Café.
Wednesday we had our half day with the Lord, finished our last minute shopping, and packed up to fly home to America.
Anna and I (Anna Grace) got henna at a market before we left.

Justin has been such a good sport about these pictures of him at the end of each blog. Thank you Justin! We had to finish big: