SummerLINK Myrtle Beach: We are Family

Posted at 13:50h in Uncategorized by Ryan Heard
Share
It’s hard to believe that Summer LINK Myrtle Beach is almost over! There are only a few more weeks left here at the Sea Mist and Cornerstone but so much to learn!  Looking back though, I’ve seen so much growth in and around our team.
Sunday started out with Pastor Russ Bennett preaching on Matthew 7: 21-29.  This was Pastor Russ’ last sermon from the Sermon on the Mount.  After church, we went to Jimmyz Hibachi for lunch with Nick and Christa.  Nick is the roommate of one of the lifeguards we came to know the first week of Summer LINK.   Later that evening, we went to a beach baptism with Cornerstone for Holly Moore.  They then invited us over to their house for root beer floats.  It was a sweet time getting to talk with the Moore family again and celebrate in Holly’s public pronouncement of her faith in Christ.  It was and is such a blessing to be able to be apart of the Church family.  Later that night, we had a mid-summer evaluation back at the Sea Mist.
On Monday, everyone went back to their workplaces not only to work but to continue to be intentional with coworkers.  I work at the Sea Mist with Daniel along with two Russians, two Bulgarians, and one Irish girl.  I’ll be the first to say that it’s not always easy to talk about Christ when there’s a slight language barrier.   That hasn’t stopped the Lord from working, though!  I’ve been encouraged this week in how open our Sea Mist coworkers have been with us about their home countries and families.  I’ve also heard stories from other Summer LINKers about their workplaces and how God is using them to spread the Gospel.  He is so good!  After work on Monday, we had our mid-summer banquet at Travinia’s.  Let’s just say we ate enough food for days.  Our chivalrous men even escorted the women one by one to the car with the umbrella because it was pouring down rain.

Tuesday morning, Corey, Michelle, Hannah, Ryan, and I got up at 5:45 to watch the sunrise on the beach.  Unfortunately, it was cloudy, so not much could be seen.  Since we were already up, we decided to participate in our own mini Olympic trials.  We had the sprint to the lifeguard stand, the long jump, and the standing jump.  It was quite the sight at 6 in the morning. 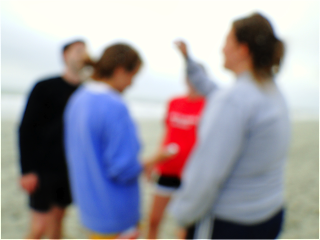 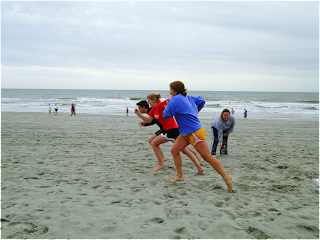 God also had his own plan for us that morning besides the sunrise.  While on the beach, we meet a young couple named Bonnie and Norian.  They came up to us to share their photos from that morning, and we ended up in conversation with them.  They had only come down for the day and were planning on leaving the next day.   Hannah was able to get Bonnie’s number, and they have been in contact a few times since. It’s amazing how the Lord works in little ways like that.  After we attempted to watch the sunrise, we had a sweet time of prayer before everyone departed to his or her workplace.  We have decided to do this every Tuesday morning as a time to just talk to the Lord about our prayers for the rest of the day and week. Tuesday night was home night at the Bennett’s.  We were graciously served breakfast for dinner with fresh waffles, almost all the toppings you could think of, egg and cheese casserole, and fresh fruit.  We got to play with the kids too.  Ellie (their less than a year old baby) was the star of the show, and Bailey and Cohen were also enjoying spending time with the Summer LINKers.  We then got to hear the testimonies of Miranda and Russ; hearing them talk about how the Lord has worked in their life was a true testament to the Lord’s grace and mercy!

Wednesday morning was a sad day as our two leaders, Corey and Ryan, left to go back to their homes.  Even though they are coming back down at the end of the summer, it was still a bittersweet moment.   Later on that night, we had bible study at Dustin and Avery Raley’s house.  While there, we discussed Pastor Russ’ sermon on Matthew 7: 21-29, and we also got to listen to Dustin and Avery’s testimonies.
On Thursday, the hospitality team cooked hotdogs for the team in the spirit of the 4th of July.  After our American inspired dinner, we packed up and headed out to the boardwalk for some evangelism and to watch the fireworks from the pier.  We parked at Fresh Brewed and split up into teams.  I was on a team with Daniel and James, and the rest of the group was split up into two other teams.  We ended up talking to two men.  One was a farmer from Kentucky and the other was a travel photographer living in Myrtle Beach.  It was amazing how the Lord worked to open up the hearts of these men to talk with us.  After the fireworks, we gathered back together at Fresh Brewed to discuss the night.  It will never get old seeing how the Lord works through his disciples.  Some times it can get discouraging when people aren’t receptive to conversations.  However, since I’ve been here, God has really placed on my heart the fact that we are still doing His work, even though fruits may not be seen immediately.
We could see the finish line coming as Friday morning came.  After a long 8 hours at the Sea Mist front desk, we were free for the weekend.  Friday was our free night, but our group just loves each other too much to stay away from each other.  We ended up going to Cracker Barrel for dinner and went to see Despicable Me 2.

Saturday morning was our men and women’s time, so we split up for a few hours to do our own things and discuss biblical manhood and womanhood.  The women slept in and then headed out to the farmers market at the Market Common.  We then took our fresh fruits and veggies and cooked breakfast/lunch.  The guys ended up going to Wal-Mart to pick up crabbing supplies for the afternoon social.  We eventually met up with the guys and drove down to Cherry Grove to do a little crabbing.  We ended up a an older couple’s house and asked if we could use their dock to do our crabbing.  They were gracious enough to let us use it, and we got to have some good conversations with them.  The older gentleman said they even used to go crabbing off of their dock back in the day.  We crabbed for about 2 hours and caught about 8 or 9 crabs.  It was definitely a fun day for everyone. 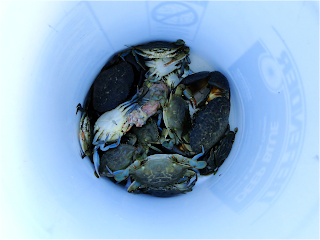 We took the crab back that evening and cooked them, although there wasn’t much meat to scrounge up.  We ended up going the River City Café for dinner instead because there just wasn’t enough crab to go around.  The experience of cooking them and just having fellowship with each other was such a sweet time.

It’s crazy to think that in just four short weeks, Summer LINK will be over.  The sweet thing, though, is that the relationships we’ve built here will carry over at Clemson, SWU, and Anderson.  I’m so excited for the rest of Summer LINK, but I’m also excited to see how the Lord will continue to work through and within us after we go back to Crosspoint.  Whatever He has in store, it will be good!
by: Mackenzie Morgan